The reporter in Fond du Lac, featured many of the smaller communities in the county during 1913.  They published a full page spread of a particular community, which included the history of the village and the current status of the local businesses.   What follows is one of those featured communities:


Eden is Abreast With Times

MERCHANTS, BANKERS AND DEALERS PLEASED WITH PROSPECTS IN EDEN

STORES ARE MODERN ONES

Customers Given Best of Service – Description of the Village

That Eden lies in the center of one of the most productive agricultural sections in this part of the state is well known by all who are acquainted with the country. The section developed rapidly, especially in the past several years, and the progressive farmers grew in number. These conditions meant a greater future for the village. For years Eden realized that a banking institution was one of the business enterprises it was greatly in need of and after some united activity a bank was launched. 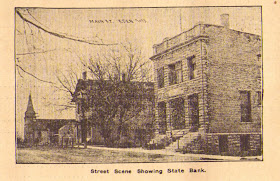 The Eden State Bank was organized in 1910 with a capital stock of $15,000. A modern two story brick structure with a handsome stone front was erected in the center of the business part of the village. The lower floor of the building is used for the banking business, which consists of general banking, insurance and conveyances. The upper floor is used for offices while the basement is the home of a restaurant, being well fitted for that purpose. The cost of the building and bank fixtures was in the neighborhood of $10,000. The officers of the bank are President, Wm. Nast Sr.; vice president Martin Kaeding; cashier W. J. Nast. These with the following gentlemen comprise the board of directors: George Flood, H. A. Kaeding and George W. Nast. As was predicted the bank has enjoyed a good business ever since its organization and is growing rapidly. The deposits are $143,000. 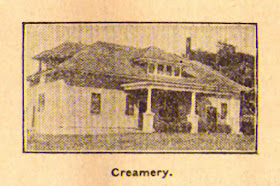 Nast Brothers and R. P. Bauer are the proprietors of the Mammoth spring Cheese and butter factory which is located at Eden. The building is one of the neatest and best equipped to be found in the county. Mr. Bauer is in charge of the factory. From 6,500 to 12,000 pounds of milk are received daily, depending upon the season of the year.

The Henry Grahl Lumber company conducts the village lumber yard, dealing in all lines of lumber, lath, shingles, building material and wood. Spacious lumber sheds provide places of storage for the stocks, thus assuring customers that the lumber and other things handled is in the best of condition. A thriving business is done. 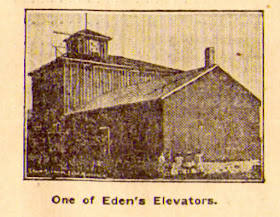 One of the large elevators of the village is owned by John O’Brien, who has been in business here the past nine years. He buys and ships all kinds of grain and also deals in coal and wood. The elevator is a modern structure and of good capacity. Besides the elevator he owns a potato house and engages in this line of the farmers’ product extensively. There is also a feed mill under his supervision.
Flood and Hildebrand are the owners of the other elevator. Mr. Flood is the senior member of the firm and has been in business at Eden for a number of years. This elevator is also of large capacity and well adapted for the line of business. Buying and shipping of grains and potatoes is done on a large scale. The company deals extensively in cabbage. All kinds of coal are handles in connection with this enterprise.

John and Gustave Rholfs are the stock buyers here. They have been here for many years and are doing an excellent business. They ship to the Chicago markets. Wednesday is their shipping Day.

The village has some well stocked stores.  F. O Briggs is the owner of one of these establishments. He deals in groceries, dry goods, crockery and notions. In fact, everything to be found in the general merchandise line is handled by him. He also owns a hay press and does a good business. He ships many carloads of hay during the year to the Milwaukee, Chicago and other markets.
Flood and Hildebrand is another of the enterprising and progressive general merchandise firms of the village. Mr. Flood has been active in the business for sixteen years while Mr. Hildebrand has been associated with him as a partner for the past five years. The firm occupies a large building and deals in all lines of goods to be found in a general merchandise store. Both are well known in the community. They report business very good and constantly increasing. 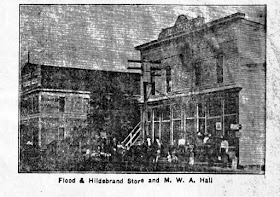 Jno. O’Brien has been in the general merchandise business in the village for the past nine years, succeeding Henry Grantman, who is now located at Lomira. He is a son of Patrick O’Brien, who died twelve years ago. He is no stranger in this community, having lived on a farm near Eden for Many years. He is still owner of a large farm in this vicinity. Since taking over the business from Mr. Grantman, he had enlarged the stock and his business is also more extensive. Mr. O’Brien also owns a large hardware store. The building is 30 by 100. Besides carrying the general lines of hardware he deals in farm machinery, engines, eave troughs, lightning rods, etc.  He has the agency for the Jackson and Hupmobile automobiles in this vicinity.

Mathew McCarty has been a resident of the village for many years. For about eighteen years he has been engaged in the hardware business, carrying a line of shelf and heavy hardware. Tinsmithing is also given attention and some farm machinery is handled.

The village has a very neat little restaurant located in the basement of the bank building.  The proprietor is Miss Jessie Meade. Special attention is given to the serving of meals. A full line of confectionery is also kept in stock. She conducts an ice cream parlor in connection with the business.

The Eden hotel is under the supervision of R. E. Salter, who has been in charge for about five years. Recently some improvements have been made. In connection with the hotel he conducts a saloon. He is also proprietor of the Eden livery. Mr. Salter formerly resided in the town of Byron, and is well known in Eden and vicinity. A new barn has just been completed.
John H. Fitzpatrick has conducted a saloon here for the past twelve years. He has lived in the vicinity for over twenty years, removing from a farm when he came to Eden to follow his present business.
M. F. Smith, formerly a farmer near Eden, has been a resident of the village for the past three years. He now conducts a saloon and also has hotel accommodations.
John M. Burnell, like his competitors, was also a farmer before coming to Eden to engage in the saloon business which he has followed for the past eleven years.

Chas Hildebrand is the village blacksmith. General blacksmithing, horseshoeing and repairing of wagons, buggies and automobiles are his lines. He has been engaged in business for a long time.

The owner of the harness shop is Frank Moerchen. He has followed the trade for a quarter of a century and for the past eighteen years has been in Eden. He also carries a line of handmade shoes and does general shoe repairing.

Elmer Wright does the tonsorial work for the villagers and the residents of the community. He has been in business here for four years.

Dr. J. E. McCarty, a graduate of the dentist department of Marquette college, Milwaukee, enjoys a good dentist practice. He has been located here three years. Prior to this he practiced at Lomira and was also in Fond du lac.
Dr. William Lyons, who is also a graduate of the medical department of Marquette college, being a member of the class of 1911, is the Eden physician and surgeon. He has been here since his graduation from the college. The offices of Mr. Lyons and McCarty are on the second floor of the bank building.

The postmaster of Eden is F. O. Briggs. The office is located in his general store. He has been in the service the past eight years. Two rural routes extend from the village, known as Nos. 35 and 36. Sam M. Kuter is carrier on the former, while W. F. Burns looks after the interests of the patrons of the latter.
The men in charge of the depot are Adolph Schaefer and Frank Rehorst. The business in the express line is also handled at the depot, the American Express company being represented there.

As yet the village is not the home of a high school. There is a district school in the village of which Miss Maggie Bellemy of Taycheedah is the teacher. 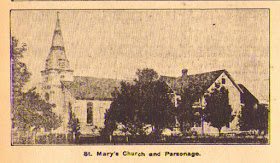 St. Mary’s Catholic church is the only edifice in the village. As early as the fifties a church of this denomination was established here.  Since then new buildings have been ere4cted as conditions warranted. The present edifice was built about twenty years ago. Rev. Fr. James R. McFarland is pastor and has been in charge for over eighteen years.  The interior of the church has been beautified recently. Among the most noticeable improvement is the electric lighting system that was installed by the Eden Electric Light company. The fixtures are of modern and handsome designs. Special mention is due the effective way in which the side and main altars have been provided with lights. The color scheme, green predominating, has been carried out in a most artistic manner, being in many cases superior to the beauty of similar arrangements in the churches of cities. These improvements meant an expenditure of considerable money. Rev. McFarland, Dr. O’Brien of St. Nazianz, Mr. O’Brien and sisters and the Mahoney family, of Eden, were among the contributors to the fund which was necessary to meet the cost of the work.
Rev. McFarland, who has been in charge of the church for many years, is well known throughout the county and state. He is thoroughly progressive and can always be depended upon as a leading figure in all that is good for the community. He desires to see improvements and does not hesitate to help promote any good undertaking. He wants to see Eden improve and takes great delight in giving his assistance. He is well pleased with the advancement of the village in the past few years and hopes for the continuation of the good work. 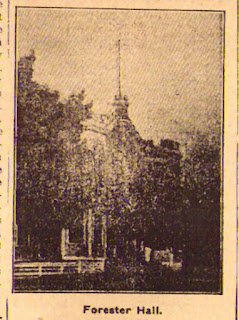 There are two lodge halls in Eden, the Catholic Order of Foresters hall and that owned by the Modern Woodmen. The former was built eleven years ago while the latter was constructed two years later. They are both large two story structures and are well adapted for lodge purposes, dancing and shows. Other conveniences have also been provided for. The Chief Ranger of the Foresters is Henry Braun, while E. J. Hayes is secretary. The Venerable Consul of the M. W. A society is H. A. kaeding and F. O. Briggs is clerk.

In Eden as well as elsewhere the cement business is rapidly coming to the front. The contractors in this line are Otto Schwartz and Braatz Brothers.